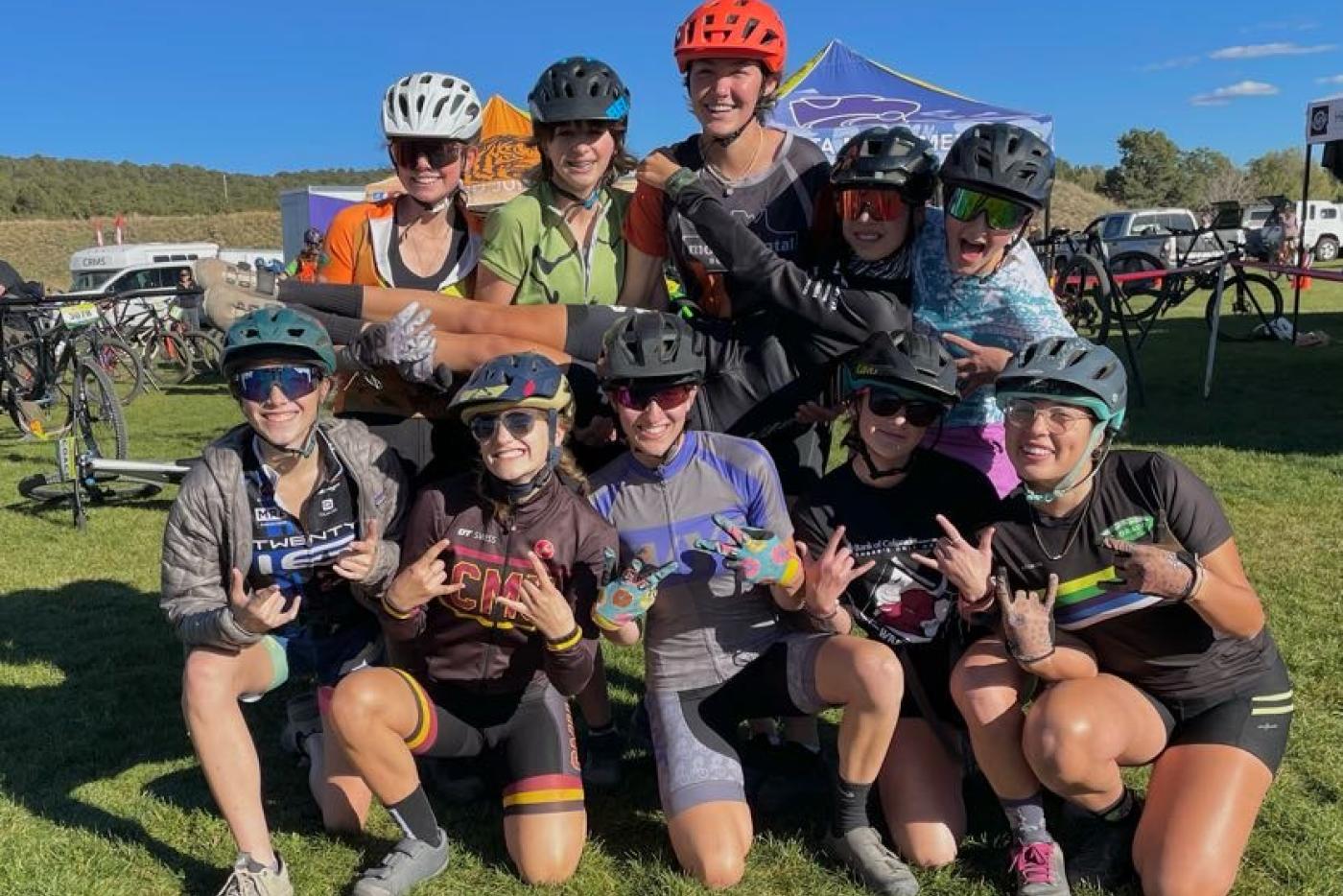 Fall is my favorite time of the year for many reasons.  Reflecting back and having photo memories pop up on my phone reminds me that mountain biking and going to high school mountain bike races as either a coach, parent or supporter and fan has been a steady activity for me for the past 12 years!

This year has been particularly memorable as GVYC has seen it's largest group of high school and middle school athletes, a larger percentage of girls are joining our teams, alumni to GVYC are coming back as coaches and mentors,  our community is getting more involved with clubs at their respective high schools and parent volunteers are creating and leading committee opportunities to strengthen the mission of GVYC.

Thank you all for your contributions of time, resources and talent to what was accomplished during the Fall 2022 season.  We  certainly have a lot to celebrate! 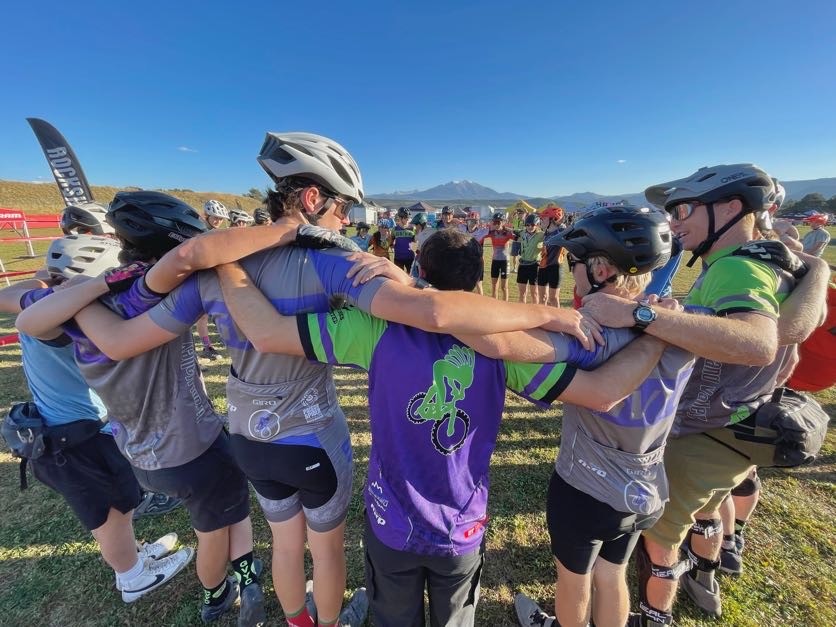 The high school team has had a great fall campaign so far!  Between training, racing, and hanging out together, we have a lot to smile about.  The season started with an overnight team camp on Glade Park.  We rode in the cooler temps and aspen groves of Turkey Flats, then up to the radio towers overlooking the valley.  It was a weekend of great rides, good food, campfires, and lots of Spikeball!  The season quickly got started and we've had the opportunity to ride in a variety of amazing locations.  This season has taken us to Leadville, Eagle, Snowmass, Nathrop, and Glenwood Springs.  Along with individual improvements from all of our riders this season, we've seen some great performances at the races.  Alma McGowan (freshman girls) and Kate Rizzo (varsity girls) each earned podium finishes as well as the Slingshot Award at different points in the season.  This is awarded to the rider with the largest improvement between their first race and the current race.  Izzy Barney (sophomore girls) also wound up on the podium at Eagle, with Siena Guzman-Newton (sophomore girls) taking the win in that race.  In the JV girls category Scarlett Hardie managed to dominate every race of the regular season and take the series overall win.  Ben Garmany also managed to snag the series overall for the freshman boys, taking two wins throughout the season.  Riley Grimes was always close behind, landing on the podium in nearly every freshman race of the season.  Grand Junction High School also managed to take second place for the series overall as a team.  On top of so many medals, trophies, and jerseys we've won this fall, there have been a ton of top ten and top twenty placings throughout the season.  As a result, 35 or our riders managed to qualify for the state championships!  Results aside, we've had a great time riding together.  We've made movies, worn costumes, and explored trails throughout the entire Grand Valley.  All of our team members have grown a great deal this season  and have the skills to access nearly any trail in the valley.  It's been a great season and we already can't wait for spring!

The GVYC Middle School MTB Team had a great season!  I am so proud of all the middle school athletes who showed up rain or shine, literally!  I personally witnessed these young athletes supporting and encouraging each other to progress while riding out on the trails this season.  It was also great to witness the true grit and team work that came out when we had a practice with some weather that moved in and made riding a bike impossible.

The stories and conversations that are shared between athletes while out on the trail prove that this program helps build life skills beyond the bike.  Seeing the athletes arrive at each practice you could see what kind of day each one had.  Some appeared tired, some were visibly excited to see friends and ride bikes, and some were quiet.  By the end of practice everyone had a smile on their face and those that were tired and/or quiet had a spark in their eye and were chatting with teammates.  This program not only encourages and aids in physical health but mental health as well.

I am so proud of each athlete and the progression that I saw!  Looking forward to future seasons and watching these young athletes grow.

We may be biased but we think we have some of the best mountain bike coaches around.  We are especially excited to have several alumni of our high school teams come back to coach our high school and middle school teams.  Jonah Howe, Eric Pipkin and Birgit Morris were on our composite team in 2013 when they won the state championship race.  Erik Brygger and Amber Lobato were GJHS teammates in 2016.

Last fall, a group of students presented to the board of directors what the Grand Valley Youth Cycling organization has meant to them and what they would like to see it evolve into in the future.  From this discussion a committee formed to explore ideas for a new logo and and a re-fresh of our brand.  This committee has current and former student athletes, board member, parent and coach representation. We are looking forward to share this with you in 2023! 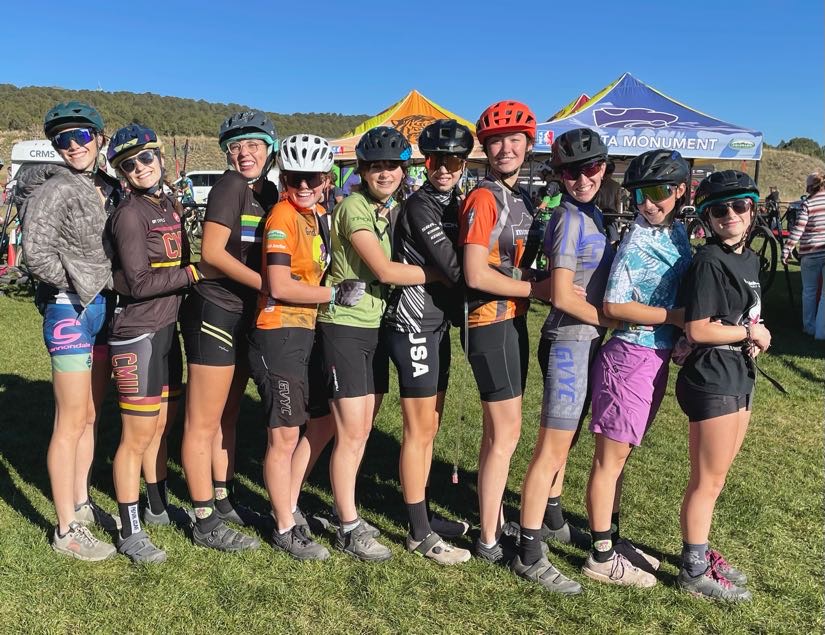 Good Luck to all of our high school student athletes that will be competing in the State Championship race this Saturday October 22 in Glenwood Springs!